Surviving inscriptions on leather dating back to the New Kingdom BCE have also been found, but the preservation of leather is poor compared to papyrus, so there is no certainty about how extensively leather was used. The inscriptions found at Abydos display different types of information: some of them are numbers, others are believed to indicate the origin of the goods, and the most complex show administrative information related to economic activities controlled by the ruler.

In tombs from Dynasty 0, the signs found on pottery and stone vessels and also on the labels attached to them were used to indicate ownership of their content, probably connected with taxation and other accounting data. The signs on pottery vessels become increasingly standardized and since these pot-marks are believed to express information about the contents of the vessels including their provenance , this tendency may reflect a growth in the complexity of record keeping and administrative control.

As Egyptian writing evolved during its long history, different versions of the Egyptian hieroglyphic script were developed. In addition to the traditional hieroglyphs, there were also two cursive equivalents: hieratic and demotic. This was the oldest version of the script, characterized by its elegant pictorial appearance. These signs are typically founnd in monument inscriptions and funerary contexts.

It is believed that hieratic was invented and developed more or less simultaneously with the hieroglyphic script. Some of the hieroglyphs found in tombs dated to the c.

Some serekhs written on pottery vessels had hieroglyphs in cursive format, possibly a premature stage of hieratic. The Egyptians called it sekh shat , "writing for documents".

With the exception of religious and funerary inscriptions, demotic gradually replaced hieratic. While hieratic still carries some traces of the pictorial hieroglyphic appearance, demotic has no pictorial trace and it is difficult to link demotic signs with its equivalent hieroglyph. According to Egyptian tradition, the god Thoth created writing to make the Egyptians wiser and to strengthen their memory.

The god Re, however, disagreed: he said that delivering the hieroglyphs to humanity would cause them to contemplate their memory and history through written documents rather than relying on their actual memories passed down through generations.

Despite the will of Re, Thoth gave the techniques of writing to a select number of Egyptians, the scribes. In ancient Egypt, scribes were highly respected for their knowledge and skill in using this gift of the gods and this position was a vehicle of upward social mobility.


For many years hieroglyphs were not understood at all. One year later, the Rosetta Stone was found, a decree of Ptolemy V, with the same text written in Greek, demotic and hieroglyphic writing. He identified the name of Ptolemy V written on the Rosetta Stone, by comparing the hieroglyphs with the Greek translation. Then, he continued to study the names, using an obelisk from Philae now in Dorset, England.

The obelisk had the name of Ptolemy and Cleopatra written on it. 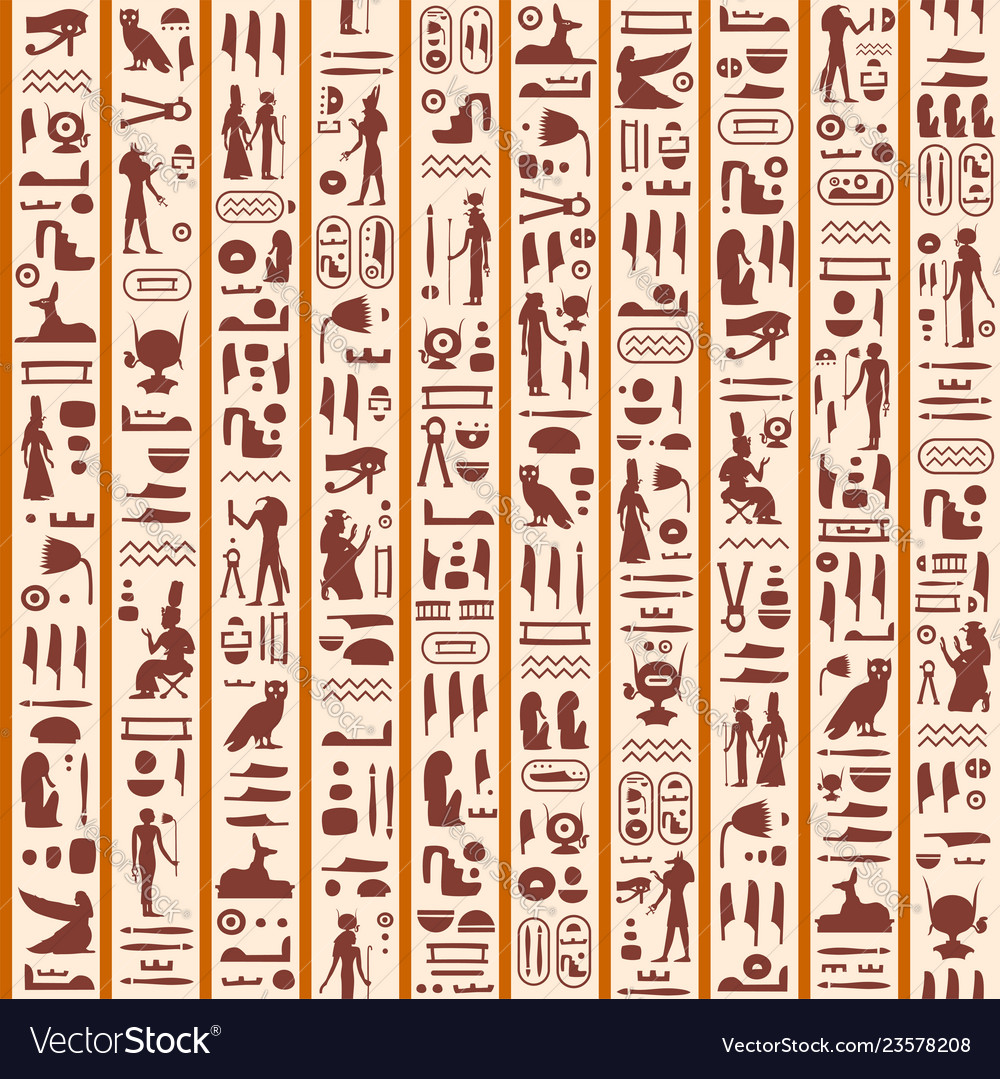 This made it possible to conclude that the ancient Egyptian hieroglyphic writing was a mixture of signals representing sounds, ideas and words, not a common alphabet. Champollion's achievement in deciphering the Rosetta Stone unlocked the secret of the ancient Egyptian writing system and allowed the world to finally read into Egyptian history. Towards the 2nd century CE, Christianity started to displace some of the traditional Egyptian cults.

Christianized Egyptians developed the Coptic alphabet an offshoot of the Greek uncial alphabet , the final stage in the development of the Egyptian language, employed to represent their language.

Writing in Hieroglyphs - The Children's University of Manchester

Ideograms are made from signs that are accompanied by a vertical line, which indicates that the sign stands for the object it represents. Determinatives appear, when needed, at the end of a word, and give a clue as to the meaning of a word. Everyday writing, such as record keeping or letter writing, used the Hieratic script, a simplified version of hieroglyphic writing.

Hieratic script is structurally the same as hieroglyphic writing, but people, animals, and objects are no longer recognizable. One of the oldest and most famous examples of Egyptian hieroglyphs can be found on the Narmer Palette, a shield shaped palette that dates to around B. The Narmer Palette has been described as "the first historical document in the world". Quibell and Frederick W. The palette is believed to be a gift offering from King Narmer to the god Amun.

Egyptian hieroglyphic writing used a core of about hieroglyphs. This number varied; during the Greco-Roman period, more than 5, hieroglyphs were in use. Cretan hieroglyphs were discovered by the archaeologist Sir Arthur Evans , who is perhaps most well known for his excavations of the palace he named Knossos at Crete, as well as the discovery of the Minoan civilization that inhabited it.

Cretan hieroglyphs are the first of three scripts discovered at Knossos, and are thought to date to around B. The script was found on Bronze Age clay tablets and sealstones at Knossos, as well as artifacts from the Minoan Palace at Petras in eastern Crete. Later scripts, known as Linear A and Linear B, may have evolved from these hieroglyphs. Linear A is thought to date to B. Anatolian hieroglyphs were used in Anatolia , as well as parts of modern Syria during the second and third millennia B. They were once commonly known as Hittite hieroglyphs, as one of the first discovered uses of the script was on personal seals from the ancient Hittite capital, Hattusha.

It is possible that the hieroglyphs used on Hittite personal seals were used in a symbolic nature and were not intended to represent language, but rather concepts such as names, titles, or good luck symbols. Anatolian hieroglyphs utilize both logographic and phonographic elements, as well as the use of logographic elements that have a phonetic compliment. Most of the signs are pictorial in nature, representing human figures, plants, animals, and everyday objects.

This practice was called boustrophedon by the Greeks , meaning "as the ox turns" when plowing a field. Within each register, signs are arranged vertically in columns.

There are no word breaks, although a word divider sign is sometimes found. The Dongba script is a pictographic writing system used by the priests of the Naxi people, an ethnic minority found mainly near the Yangtze River in China as well as in Tibet. Pictographic sign.